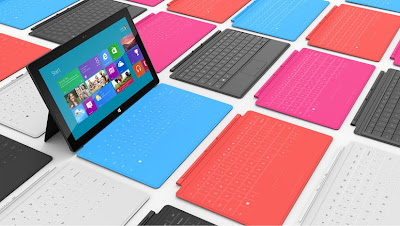 As we move through October and toward the end of the year we hear more and more about Windows 8 and Windows Phone 8.  Microsoft has recently made a bunch of announcements surrounding the Surface tablet, so here I am… jumping on the bandwagon.

There will be 32 and 64 GB versions and you can get the devices with and without those cool keyboards.  We’ve also been told more recently that the full version of Microsoft Office 2013 that is included on the RT Surface is not licensed for use by businesses.
This means that if you want to use your Surface RT at work you’ll need an Office 2013 Pro license at work.  You shouldn’t need to reinstall software (don’t quote me on that), but to be compliant you’ll need to be covered with an Office 2013 business license.  If you’re in the Microsoft Volume license program and have a work computer with Office 2013 you may have a multiple device license already… in which case you should be covered.  Talk to your Microsoft reseller or Partner for more about that. 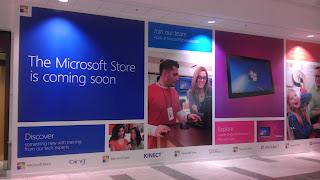 Another tidbit… Microsoft is opening a number of new temporary stores for the holidays this year… which should make it even easier to get your new copy of Windows 8 or to score a Surface tablet!  Check out the Microsoft Store locations, including the holiday stores here.

Here’s where Office 365 comes in… if you have one of the new Office 365 subscriptions being released early next year you’ll also be covered for Office 2013… since it is included with your subscription.

So, there’s yet another good reason to look at Office 365.  And, I just learned today that if your company has an Enterprise Agreement with Microsoft for licensing and you add Office 365 to your EA that you may be able to get a MAJOR discount on the per-seat cost of migrating to Office 365.  Talk to your Microsoft Partner for more information about the various incentives that are available to you.

Here are a couple questions I was asked today:

How easy is it to type on tablets?

Typing on a tablet is typing on a touch screen.  You one-finger or two-finger type.  If you have something like my Iconia A500 you can attach a USB keyboard.  You could also pair it with a Bluetooth keyboard for wireless typing.  Using the touchscreen keyboard is definitely slower than a keyboard but faster than on a phone.
Does Skype work on them?
You can use Skype on Android tablets.  See http://www.gadgetsbing.com/2010/11/skype-hits-on-android-tablet/ for some details.  It’s on iPad (http://forum.skype.com/index.php?showtopic=804071).  Looks like not on Playbook (http://forum.skype.com/index.php?showtopic=813617).
E-mail, Skype, and Internet need to be speedy and secure, are they?
Security – the Playbook is potentially more secure but it requires pairing with a Blackberry phone I think.  It’s half-baked, but better than iPad and Android.  Wireless security is good on all of them… assuming you connect over a secure wireless network with decent encryption.  It doesn’t matter which device you have, if you connect over an open wireless connection your transmissions can be intercepted and read.

I use a Sprint Overdrive 3g/4g hotspot in combination with my Iconia for on-the-go internet.  If you get a tab with built-in broadband you wouldn’t need to do that.  I don’t do any significant work on public wi-fi though for security reasons.  If you stay of public wi-fi you’re pretty safe.

Security options for business use of tablets are few at this point.  The Microsoft tabs based on Windows 8 should be good but those won’t be out for a while.  The Playbook should be good for security but there’s a whole lot of downside for the Playbook in my opinion.

Summary
This is a brand new form factor with several new software platforms.  It’s going to take it a while to mature to the point where a lot of businesses are comfortable depending on them.  For limited use and if you’re careful though I think they’re ready now for those that want to be on the leading edge.